Travels With A King And A Knight 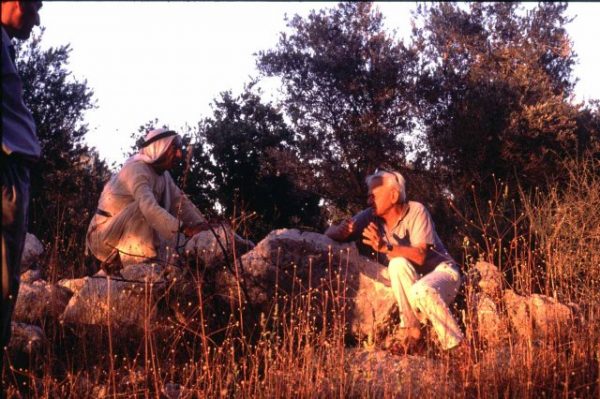 The settlement of Ekron was established on land that had been purchased from the Arab village of Aqir. For several weeks, before the pioneers of Mazkeret Batya moved out to live by their fields, they had lived in Aqir itself, sharing with the Arabs the water drawn from their well, and eating the bread they baked. Their Arab hosts had treated them well.)

Adnan el Rul’s (Ghul) grandfather had been the muchtar of Akir until 1948. Aqir’s relationship with neighboring Ekron (Mazkeret Batya) was renowned.
The relationship was solidified even further between the two village leaders. Mr. Shkolnik, grandson of Ephraim Shkolnik, one of the original eleven founding fathers of the moshav then numbering about one hundred souls, and el Rul, grandfather of Adnan el Rul and the muchtar of Aqir, a town of about twenty-five hundred inhabitants back in 1948.
As a sign of the special relationship between the villages, the two “muchtars,” not that young in the 1930’s, exchanged their walking canes. Skolnik’s cane went to el Ghul, and el Ghul’s stick was now used by Skolnik.
The bloody clashes, also known as the Arab Revolt, broke out in 1936. Grandpa el Ghul took the walking stick he had gotten from Grandpa Skolnik and sat himself down in the village center by the main road leading to Jewish Mazkeret Batya. He put the cane down by his side and placed his hunting rifle on his lap, announcing to all in the village that if anyone amongst them had in mind to go and hurt the Jews he would first have to pass by him.
Ekron and Aqir went through the three years of bloody clashes and the Arab Revolt without a single hair falling or a single home being damaged.
During the forties a Royal British Air Force base was constructed near the two villages in an area that is known today as Tel Nof.
The amicable relations between Aqir and Ekron continued until 1948.

On May 4, 1948, Battalion 52 of Brigade 5 (Gi-vati) reached Aqir and informed the residents of Aqir that they would have to evacuate the village and go south, in the direction of Gaza. Grandpa Ghul took the cane given to him by Grandpa Skolnik and made his way to Ekron.

“Now it’s your turn to defend us,” he told Shkolnik. Shkolnik took the cane of Rul and went to the Gi-vati officers’ tent standing not far from Mazkeret Batya. He related to them how the men of Aqir had been good neighbors, what Grandpa Rul had done at the inception of the disturbances, and how he had kept Aqir and Ekron out of the conflict at a time when Givat Brenner and Na-an were being attacked.
The officers were unmoved, attaching no significance to the fact that the village was friendly. No, there was nothing to be done, they had to be expelled.

Shkolnik returned to Aqir and announced there was nothing he could do since the orders were coming from the top echelons.
The people of Aqir loaded up as much as they could and traveled east to Isdud,[i] south to Majdal, and finally to Gaza, setting themselves up ultimately in Wadi Aza.

Had Mohammed el Rul of Aqir, the man who engineered and directed so many terrorist attacks ever heard the story of the cane? It is reasonable to assume that he had not only heard about it, but that the cane can be found today in one of the refugee camps situated in Wadi Aza, in a neighborhood of those who were expelled from Aqir.

I heard this story from Professor Shkolnik of Cabri,[ii] grandson of the Jewish “muchtar” of Ekron-Mazkeret Batya, who passed away On mid 2004. It was 2 or so months before Israeli planes assassinated Mohammed el Rul of Aqir.

All that’s left is for me is to quote Xanoch Levin’s[iii] words: “We succeeded – awfully.”*

The Last Jews of Yemen