Daash, A journey to Satan’s Doorstep

End of the road

The Face Of Yafo

The fish who fell from the sky

It was snowing in Istanbul because it was January and I took a bus to Izmir.

54 Kilometers east of  Izmir lies the small town of Torgutlu, a place of no significance apart of the yearly camel Wrestling, the Deve Guresh,  that takes place in an open field near the town.

The Deve Guresh – the  Wrestling is a fine festival supported by the  food stalls around it – the sausages, the Kebab, the drinks and the Musicians.

The music is an active part of the fight – this is how one  blesses the camel and inspire combat spirit into the bulls that at that season dislike one another immensely as it is the mating seasons. As do males everywhere on this planet, looking for  a reason to fight,  their testosterone is driving them out of their minds.

This  is not a show for the tourist – its a local Turcomans fair.

At 10 o’clock in the morning arrived the first camel,  huge and wonderful.

And then arrived Shahin – a massive bull, Saliva raining from his mouth that was retrained by a Muzzle. 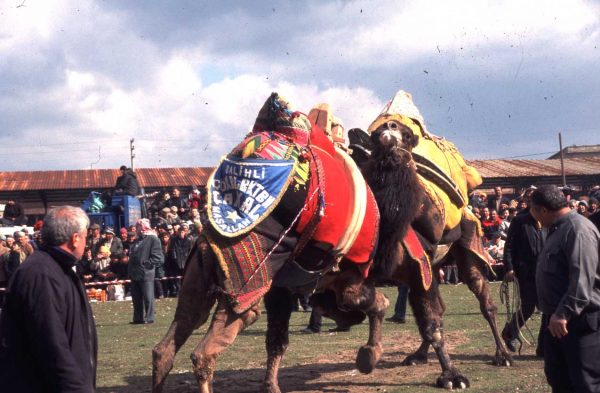 Shahin is Saker Falcon in Turkish and Arabic. Ahmet, the run down  proprietor, said he was from Bergama and that the 1st prize is 40,000 Turkish liras – more then 25, 000 dollars. There are at least 10 camel battles a year. A man can live of his camel.

I gambled on Shahin. Because of the name: the Saker falcon is a noble decisive bird – if they share qualities-

The crowed gathered and a tractor  spread send to soften the hard frozen ground.

The contest started – the first couple. The second. The Third. Using any violent technique to throw the opponent to the ground: pushing, biting legs, jumping on the neck trying to bring down the other mountain that weights no less then a ton. 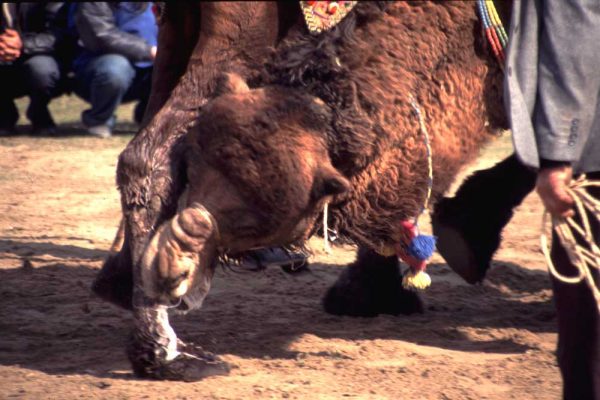 There is a referee. There are the owners, there is a crowd of helpers with ropes to dislodge camel from camel when they tangle themselves into a ridge. And the spectators. No real borders.

And now it was Shahin’s turn that did not hesitated and charged his opponent:  jumping in the air and landing on the other’s camel neck, pushing him to the ground, adding a bite, a leg tuckele, blood staining the saliva.

Two camels tangled in a massive flash and hair their backs pointed to the snowy mountains.

Separate! Shouted the referee but as soon as Shahin was back on his legs he charged at the bitten opponent scattering the watching crowd. What a camel!

Not for a moment forgetting he is here for  a reason – To fight all bulls and to show them who is the biggest and the strongest – to have the biggest herd of lady camels he can put his muzzle on.

The last jew in Kabul